On the 11th May I went to London to see two Exhibitions: The Radical Eye – Modernist Photography from the Sir John Elton Collection, at Tate Modern; and America after the Fall – Painting in the 1930s, at the Royal Academy. 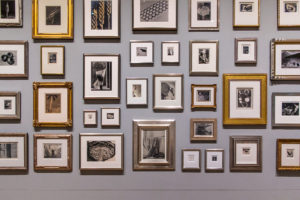 The Radical Eye is shown in six sections: The Radical Eye; Portraits; Portraits Experiments Bodies; a film about John and his collection; Documents; and Objects Perspectives Abstractions.  The exhibition focuses on the first half of the 20th century looking at how artists were experimenting with and transforming photography.  It includes 150 works from 70 artists, covering such seminal figures as Brassai, Imogen Cunningham, André Kertész, Dorothea Lange, Tina Modotti and Aleksandr Rodchenko.  There are wonderful individual images, revealing some of the creative possibilities that photography offers; and it is a useful introduction to the photographic history of the period, though some of the work is very familiar.  Overall, it suffers from the inevitable constraints of being drawn from one private collection – some significant work is missing and some of the images by minor artists seem like packing. 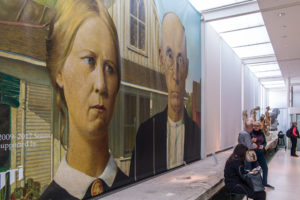 America After the Fall is shown in seven groups of paintings: New York; City Life; Industrial Life; Looking to the Past; Country Life; Visions of Dystopia; and Looking to the Future.  Forty–five works by around 30 artists, including Jackson Georgia O’Keeffe, Edward Hopper, Thomas Hart Benton, Philip Guston and Grant Wood, paint a riveting portrait of urban and rural America in this transformative period.  It shows how the artists responded to rapid social change and economic anxiety with some of the 20th century’s most powerful, largely figurative, art.  It embraces brilliantly optimism and anxiety, rural idyll and urban dystopia, social intercourse and loneliness, communality and segregation.  All of the work was new to me, with the exception of Wood’s American Gothic, and the impact was consequently all the greater.

Seeing the two exhibitions back to back inevitably lead to comparisons between the two media, photography and painting.  Given the very different nature of the exhibitions there is no point in trying to draw any general conclusions and opening an old, stale debate.  However, some of the work in The Radical Eye covers the same subject matter as America After the Fall and that does prompt a comparison of how the two media have addressed it as a nation-shaping story.  To make that comparison it is necessary to reflect on a wider range of work than appears in The Radical Eye. 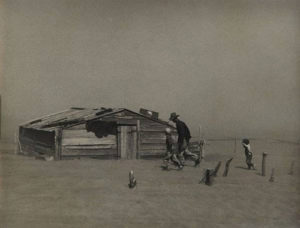 Both media record, reveal and interpret the times.  Painting has the advantage of allowing the imagination free range; photography provides a factual record of a moment in time, a (not the) truth.  The same narrative is revealed in different ways, shaped by the inherent nature of the media.  It also depends on vision of the artist.  The domestic scenes and interiors painted by Doris Lee, Charles Sheeler and Helen Lundeberg and Morris Kantor are comfortably reassuring in a way that the lives shot by Walker Evans and Ben Shahn are not.  Whose vision is the truer? 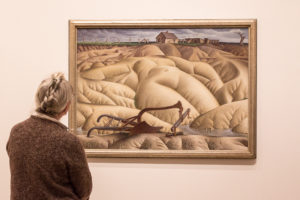 There is undoubted power in the imaginative free rein given to the artist, but this does not always carry the greater weight.  As an expression of the disregard for the land that created the American dust bowl, Arthur Rothstein’s photograph of A farmer and his two sons during a dust storm in Cimarron County, Oklahoma, 1936, is far more potent than Alexandre Hogue’s Erosion No. 2 – Mother Earth Laid Bare, 1936, which seems laboured and contrived in comparison. 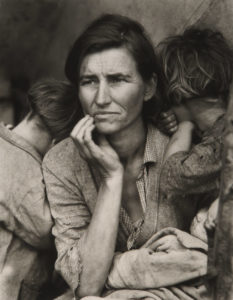 Perhaps the most celebrated work in America After the Fall is Grant Wood’s American Gothic, 1930, which is rightly called iconic.  I don’t think The Radical Eye has a signature image, but one of its most famous works is Dorothea Lange’s Migrant Mother, 1936, it too is iconic.  In these pictures painting and photography achieve an equivalence in creating two defining images of the momentous 1930s in America.

Photos: 1. From Objects Perspectives Abstractions, The Radical Eye, Tate Modern, May 2017; 2. America After the Fall, Royal Academy, May 2017; 3. Arthur Rothstein, A farmer and his two sons during a dust storm in Cimarron County, Oklahoma, 1936; 4. Alexandre Hogue, Erosion No. 2 – Mother Earth Laid Bare, 1936, at the Royal Academy; and Dorothea Lange, Migrant Mother, 1936