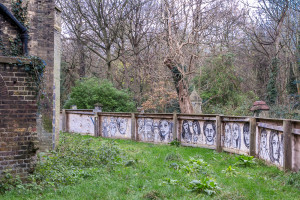 Abney Park Cemetery is beautiful and melancholy. In the greater sweep of time, it’s a reminder of our ephemeral existence and ultimately doomed attempts at immortality through memorials. The Derelict Chapel epitomises this. Someone has tried to personalise the crude fence with their own form of urban ephemera.

The Chapel has an interesting story as told on the Abney web site.

“The first foundation stone of the chapel was laid by the Lord Mayor of London Sir Chapman Marshall on the 20th of May 1840, the day of the opening ceremony of Abney Park Cemetery.

The architect of the chapel was William Hosking FSA (1800 – 1861), a professor in architecture & civil engineering, and the first professor of architecture at Kings College. Hosking worked in conjunction with builder John Jay of London (interred in Abney Park on Dr Watts’ Walk), and George Loddiges of Hackney, the renowned horticulturalist.

Central to the design of Abney Park, the chapel is the oldest surviving non-denominational chapel in Europe, and is the only surviving public building designed by Hosking, then considered a controversial architect. Hosking carefully planned the chapel to reflect a lack of bias towards any one Christian sect and the cruciform plan adopted the equal arms of the Greek cross, giving perceptual strength to the concept of equality before God.

The chapel is Gothic, with a single interdenominational cell and one covered horse and carriage entrance. It was not consecrated and functioned purely as a funerary chapel – not a place of worship.” http://www.abneypark.org/