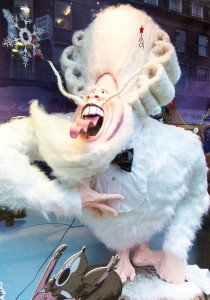 A new take on silent partners in window displays.

“Ted Baker in Cambridge has been accused of taking the romance out of Christmas with a tongue-flicking abominable snowman window display – which has been branded ‘gross and leering’.

Shoppers at the Grand Arcade were shocked and appalled to see the “vulgar” abominable snowman with a giant moving tongue staring out from the window of the fashion store – and accused the company of tastelessness.

The yeti figure has certainly lived up to its name, according to Christmas shoppers.  Dr Lisa Steen, 43, a mother-of-two of Victoria Road, Cambridge, said: ‘That abominable snow man is gross and leering. Grotesque. It spoils the Christmas decorations of Cambridge. It is horrible for women out clubbing being seen off at the night bus stop, ruining romantic nights out. Why do they need to be so gross and have such horrible taste every Christmas? I boycott the shop because of it. It is so vulgar.’

Another shopper, who asked not to be named, said: ‘It’s quite scary. It’s got like this moveable tongue which is a bit weird and it’s not going to make people go in and buy their clothes especially as they are so expensive.’

But cheeky Ted Baker bosses insisted the ‘singing’ snowman was as pure as the driven snow – despite shoppers saying the good ‘intentions’, may have drifted.
A Ted Baker spokeswoman said: ‘Ted’s Abominable Showman has a lot of love to give, and has only the purest intentions. He just wants to teach the world to sing!
‘Visit www.tedbaker.com/tedpresents to create your own singing showman.’

Ted Baker’s press release announcing the arrival of the snowman says: ‘From the coldest corner of Mount Khelvamin comes the tale of an underdog with a soft disposition and an unexpected penchant for the arts…He’d belt out an operatic ballad from the mouth of his lonely cave, shaking snow from the highest peaks. He’d always dreamed of bringing the house down with his performances, but not literally.  For all his well-meaning efforts as a high-altitude entertainer, it seemed this gifted creature was doomed to remain undiscovered. Until now…’
It’s not the first time the store has caused controversy with its window display.
In 2010 its racy festive shop window Santa was described as ‘sick’ by a city shopper, as the News reported. The scene included a moving mannequin dressed as Father Christmas who lifted his tunic to reveal stockings and suspenders.”