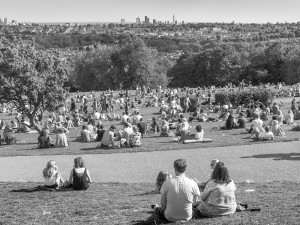 Glimpsed from the train heading north out of London Alexandra Palace looks well-named – a grand honey coloured neo-classical palace looking down regally on London. Close up it’s showing its 140 years; worn and tired it exudes the air of lacking a purpose in life. Crowds on the park below the South Terrace literally and metaphorically turn their back on the Palace and look towards the modern icons of London in the City and Canary Wharf.