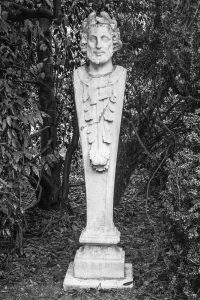 A herma or herm, is a sculpture with a head, and sometimes a torso, above a plain, usually squared lower section, on which male genitals may be carved – the Anglesey Abbey example is decorously decked with foliage.   The form originated in ancient Greece and is connected with the cult of Hermes, the fertility god, whose bearded head surmounts the column.  The statues, thought to ward off harm or evil, were placed at crossings and entrance places. Now a formal sculpture, the herm derives from the heaps of stones, or a shapeless columns of stone or wood, by the sides of roads that were the focus for the earliest worship of Greek divinities.