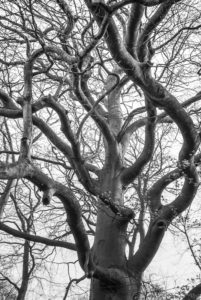 ‘Old trees: hugely domed, usually much branched; occasional survivors of the fellings of two wars with 15-20m straight, cylindrical bole’, is how The Field Guide describes the common beech.   Some of the trees in the Beechwoods fit the first description.  It’s the shape of Robert McFarlane’s beech in The Wild Places: ‘a tall grey-barked beech, whose branches flare out in such a way that it is easy to climb….Around the base of its trunk, its bark has sagged and wrinkled, so that it resembles the skin of an elephant’s leg.’ 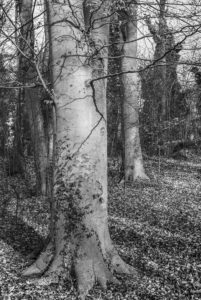 Some of the trees also fit the second description, a smooth grey trunk rising clear out of the ground from a small rim of toe-like roots.  This form gives rise to the occasional name of ‘elephant tree’ from its resemblance to the leg and foot of an elephant.  Elephant Tree is more usually a common name for several plants with swollen stems referring to a variety of trees, such as the Sudanese frankincense Boswellia papyrifera.  (It’s also the name of a psychedelic metal rock band!)