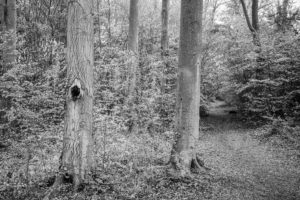 Three of the most quoted lines in poetry are: ‘Two roads diverged in a wood, and I – / I took the one less travelled by, / And that has made all the difference.’, from Robert Frost’s ‘The Road Not Taken’.  This has been widely misunderstood ‘as an emblem of individual choice and self-reliance’, argues Matthew Hollis in his biography of Edward Thomas, Now all Roads Lead to France (2011). Apart from the traps laid earlier in the poem (no discernible difference between the two paths at all), Hollis asks: ‘…how can we evaluate the outcome of the road not taken?; and ‘…had the poet chosen the road more travelled by, then that, presumably, would also have made all the difference.’  The poem took the path less travelled with its tongue firmly in its cheek.

Photo: The Beechwoods, Cambridge, May 2017