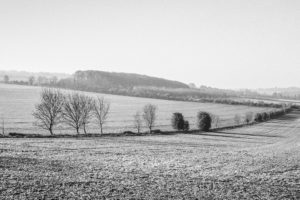 On 9th April 2017 I posted two colour pictures, ‘Beechwoods Setting’, trying to show the context within which the woods are set.  They put the woods in the middle distance and show the contrast between the massing of the trees and the tilled formality of the adjacent fields, emphasised by the bareness of the earth.

These two pictures, taken from more distant viewpoints, show the wider setting and reveal something of the isolation of the woods.  The Beechwoods are what in geological terms might be called an erratic.  The first picture is from the north, Lime Kiln Hill; the second from the west, Cherry Hinton Road.