Beechwoods – The Past That Lingers 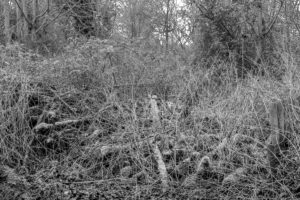 Buried somewhere under this tangle of brambles is a three sided wooden bunker.  What was it for and why has it been abandoned?  In the March 2007 issue of Black+White Photography Anna Bonita Evans writes about the photography of Patti Smith:  ‘The pictures align with her overall focus in photography, which is to document spaces and objects infused with significance…Smith says: “Taking my pictures is really a very simple matter.  I take pictures of things I want to see”… [her pictures] capture the past that lingers…’