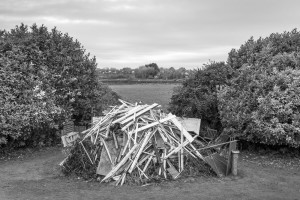 This is a substantial trace working at a several levels.  The materials in this stack are traces of previous objects now discarded and broken down.  The stack itself is a trace of the activity involved in its creation.  And it may be a trace pointing to the future as well as the past: photographed on the morning of 5th November, it likely anticipates the intention to have a Guy Fawkes Night celebratory bonfire.  If so it will surely leave a trace on the nearby hedges.  Photo: Bottisham Lock, November 2016 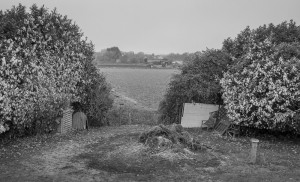 The site was photographed again today.  One trace has gone to be replaced by others: ashes and the predictably scorched hedges.  Photo: Bottisham Lock, December 2016