Posted on September 5, 2016 by brianhuman 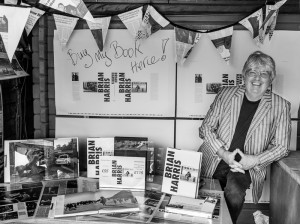 I met Brian Harris at The Gogs Farm Shop, Cambridge, on Sunday 4th September.  He was promoting his book, ‘Brian Harris – …and then the Prime Minister hit me…’. Brian’s story is told in a 100 pages of narrative describing his early life, how he got into photography and his careers as a freelancer and staffer for The Times and the Independent.  Two hundred or so pages of photographs show the strength and range of his work.  As the cover blurb says, ‘The personal stories that illuminate Brian Harris’s photographs are a valuable social document of the changing face of the British newspaper industry experienced from the inside.’  This is a fine publication, serving as both autobiography and retrospective of his work and an elegy to an era (the final one?) of photo journalism in the print media. 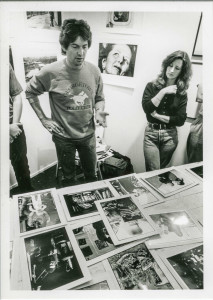 Brian contributed to group shows at the Cambridge Darkroom; and had a solo exhibition and ran a workshop there in September 1989, pictured here with Carola Rush, the CD Education Officer.  Putting this on Facebook prompted the following exchanges with Carola.

CR: When this was taken, Brian was just being ‘dropped’ by Murdoch and The Times and he was in the process of setting up the Independent with a group of like-minded journalists (if I remember rightly). I seem to recall, we (and Brian!) learnt of Murdoch’s plans via a news article in the British Journal of Photography!

BH: In the book Brian says he resigned from The Times as a result of arguments with the paper over use (failure to use!) of his pictures of the Miners’ Strike and a story about leprosy in Chad at the end of 1984. He joined the newly formed Independent in July 1986. It’s not inconsistent with your recollection, Carola, which contains the essence of deplorable ascent of Murdoch.

CR: Well I’m sure Brian remembers better than me!  He was brilliant when it came to media studies stuff – some of his stories were quite chilling. Like press boys actually asking youths in N. Ireland to throw another petrol bomb because they didn’t catch the first ones in colour for the supplements etc. I’m glad he has written a book. I will try to get hold of a copy – if only to learn the true order of events.

BH: Maybe, maybe not and we all have selective memories. I agree he’s a very acute observer of the media scene and takes a pretty jaundiced view of how it works. I’ve had a quick scan of the section dealing with NI and I can’t find the petrol bomb story repeated, but it sounds entirely credible. He’s selling the book on line and he is at brian@brianharrisphotographer.co.uk. I showed him the Darkroom picture, so if you contact him he’ll remember you.