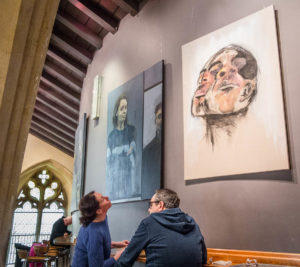 ‘Fantastic food in the centre of Cambridge’, is how the Michaelhouse Café promotes itself.  The web site explains: it ‘is one of Bill’s Cafés founded and operated by food writer and restaurateur Bill Sewell. Bill has been involved in Michaelhouse since before it opened in 2002. The café is set within the remarkable re-development of St Michael’s church under the auspices of the Michaelhouse Centre.’   Pevsner, writing of St Michael’s in 1970, says: ‘A small, extremely attractive church almost entirely of the early C14.  It was appropriated to the newly founded Michaelhouse and rebuilt by its founder Hervey de Stanton.  In 1327 he died and was buried in the chancel of the new, yet incomplete church.’