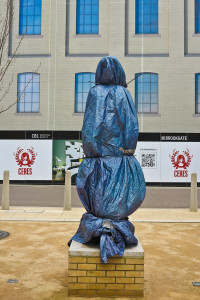 Ceres is the largest object in the asteroid belt, which lies between the orbits of Mars and Jupiter. It is a ball of rock and ice 950 km in diameter, containing a third of the mass of the asteroid belt.

In ancient Roman religion, Ceres was a goddess of agriculture, grain crops, fertility and motherly relationships.

Ceres leads a national coalition of investors, environmental organizations and other public interest groups working with companies to address sustainability.

Ceres, an exciting, ambitious and considerate development in CB1 that successfully blends tradition with modernity – creating top end residences that raise the bar for quality living spaces in the city [Cambridge].

Thanks to Selcannur or alerting me to this bit of urban ephemera.