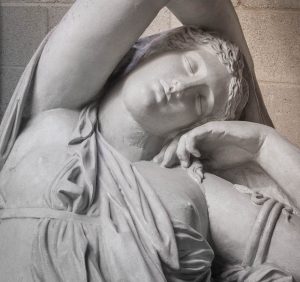 Ariadne, daughter of Pasiphae and Minos, fell in love with the Athenian hero Theseus and, with a thread, helped him escape the Labyrinth after he slew the Minotaur. Here the legends diverge, as they so often do: she was abandoned by Theseus and hanged herself (bad); or, Theseus carried her to Naxos and left her there to die, but she was rescued by and married the Dionysus (not so bad).  The statue shows her in restless sleep – maybe she is wrestling with Ariadne’s Thread, trying to decide what to do next.