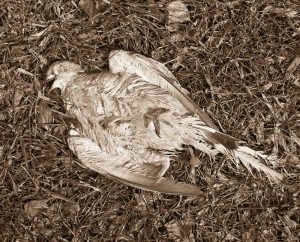 Collared doves are a pale, pinky-brown grey colour, with a distinctive black neck collar.  They have deep red eyes and reddish feet. Their monotonous cooing is a familiar. Often seen on their own or in pairs, flocks may form where there is a lot of food available.  Seen just about anywhere, but often around towns and villages. Collared doves came to the UK only in the 1950s, after a rapid spread across Europe from the Middle East.