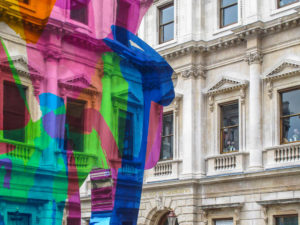 A version of Colouring Book by Jeff Koons at the Royal Academy during the Summer Exhibition 2011.  One of a number of versions, apparently: ‘A page from a Winnie the Pooh coloring book featuring Pooh’s companion Piglet was the genesis of Coloring Book. Koons took a magic marker to the page and colored in various zones; in the fabrication of the sculpture, he removed Piglet from the composition, which resulted in this abstraction rendered in cheerful pastel colors.’  In highly polished stainless steel, it became an optical illusion – was the sculpture transparent or was it reflecting the surrounding buildings?