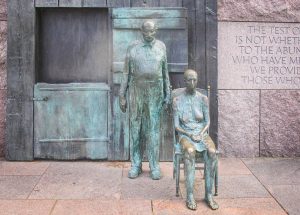 When I visited Washington I found the Franklin Delano Roosevelt Memorial the most moving of tributes along the National Mall.  Designed overall by Lawrence Halprin, the sculpture The Rural Couple is by George Segal.  I don’t know what influenced Segal, but for me it’s an image straight out of Walker Evans’ Let Us Now Praise Famous Men.  The inscription on the right reads in full: ‘The test of our progress is not whether we add more to the abundance of those who have much; it is whether we provide enough for those who have too little.’ (FDR, Inaugural Address, January 20, 1937).  Plus ca change.