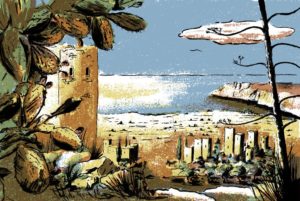 Katyuli Lloyd has illustrated the new Folio Society edition of Patrick Leigh Fermor’s Mani.  The cover shows ‘The blood-feud towers of Yerolimenas’ [or Gerolimenas].  Writing in The Oldie (September 2017), she describes ‘Yerolimenas, a pretty, coastal town…But I wasn’t prepared for quite how remote deep Mani was.  I took a short walk around the village.  Houses were largely abandoned or half-renovated, roofless, high stone walls had crumbled, and telephone wires hung, criss-crossed and tangled.’ 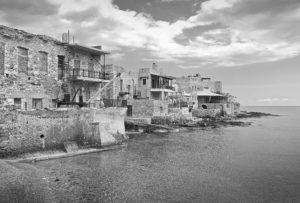 I visited the village twice.   ‘Gerolimenas, coffee, fishing boats, yellow and green nets, sheer cliffs, black-red sea urchins in the harbour, continuous reeling from cicadas in the eucalyptus; bleak sun-wracked landscape and prickly pears.’ (2007)  ‘Gerolimenas.  Lunch of grey mullet overlooking the Gulf; a fishing boat put out to sea and one was moored at the quay.  Like other places, Gerolimenas seems to have more tavernas and accommodation than it can reasonably support and there is much decay in the old commercial area by the quay – signs of its earlier port importance.  There is some restoration at the southern end of the village along the water’s edge – warehousing converted to a hotel.  As we got back to the car to leave raised voices came from a café – two Greeks having a discussion, the language and the temperament raising it to the clamour of an argument.’ (2011)