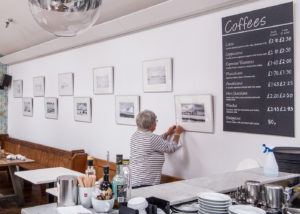 Sue Brock-Hollinshead puts the finishing touches to her exhibition of photographs of Iceland at Balzano’s.  Ten pictures capture the stark simplicity of the landscape, its variety and the contrast between domesticity and the volcanic tensions beneath the surface.  It’s a timely tribute to a pristine land of snow and ice now under treat from the destructive infrastructure of tourism.