Following recent posts under ‘silent figures’ it occurs to me that the majority of the figures shown in my pictures are female – they are, dominating males in the ratio of 4:1. As a male photographer this might not be unexpected. Nor is it necessarily a matter for an apology: I’m inclined to the subjective view that female figures are used with greater creativity and variety than their male partners and hence are more interesting subjects.

Subjectivity aside, the reality is that the silent female figures in windows displays greatly out number males. A recent count of mannequins is shop windows in Cambridge revealed 434 females and 203 males, a ratio of more than 2:1. This reflects consumer spending patterns and the nature of the fashion industry.  Arguably, underlying this are important gender issues in which women are pressured over the importance of physical appearance in a way that men are not. The mannequins then reinforce the objectification of women by invariably presenting an overtly slim and attractive image conforming to a certain standard of what is supposed to be the ideal. This ideal woman is also silent and passive.

This might be reading too much into what is just a practical, long-standing approach to the display of clothes were it not for lapses of judgement. The ‘Discount’ post on 8th October 2012 is sexist; and it’s difficult to justify Oxfam’s use of a mannequin in its 2014 Christmas window display shown below.

But don’t blame the mannequin – silent and innocent partners is the marketing game. 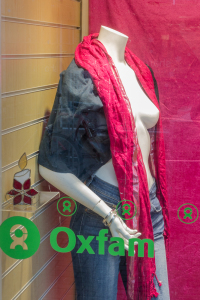