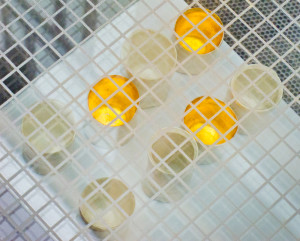 One of the most significant of the characters that inhabit Paddy’s pre-war world is Baron Philipps (Pips) von Schey.  Paddy’s stay with Pips at the Schey country house at Kovecses enlivens the later pages of A Time of Gifts. This episode gets an unexpected reference in Edmund de Waal’s sparkling biography The Hare with Amber Eyes (p. 177 of the illustrated edition, Chatto & Windus, 2010) due to an important family connection.

In The Hare Kovecses is described as ‘a very large and very plain eighteenth century house (“a large square box such as children draw”…) set in a flat landscape of fields with belts of willows, birch forests and streams.  A great river, the Vah, swept past, forming one of the boundaries of the estate…There was a swimming lake with fretted Moorish changing huts, lots of stables and lots of dogs.’  Trains stopped ‘at the tiny halt on the estate.’  The Hare includes several pictures of Kovecses.

Pips is pictured in a pen-and-ink drawing playing Wagner at the piano.  He had been educated by tutors and had ‘a wide circle of friends in the arts and the theatre, is a man around town in several capitals and is impeccably dressed…’.  A further sign of his high profile: ‘Pips appears as the protagonist of a highly successful novel of the time by the German Jewish novelist Jakob Wassermann…Our aesthetic hero is a pal of archdukes…He is erudite about incunabula and Renaissance art…’.  Kovecses became a retreat for the Ephrussi family, a refuge from the banking hothouse of Vienna for games, music and plays, for swimming, walking riding and shooting in the years before 1914.

With the advent of war, ‘Uncle Pips is called up, handsome in his uniform with its astrakhan collar, to fight against his French and English cousins’.  In 1915 he ‘is serving as an imperial liaison officer with the German high command in Berlin, where he is instrumental in helping Rilke get a desk job away from the Front.’  Wartime shortages beset the Ephrussies in Vienna and in 1916 they go to ‘…Kovecses for the whole long holiday.  This means that at least they can eat properly.  There is roast hare, game pies and plum dumplings…’.  By August 1918, ‘There are only two old man to tend the gardens and the roses on the long veranda are unkempt’ at Kovecse.

After the war Pips maintains his friendship with Rilke and gives his niece, Elizabeth, de Waal’s grandmother, an introduction to the poet.  She sends him her poems and they correspond, though they never meet.

By the early 1930s and with the ascendancy of fascism and anti Semitism life became increasing difficult for the Ephrussies.  In 1934 (the year of Paddy’s visit) ‘Viktor and Emmy holiday together at Kovecses, but since the death of her parents it is a strangely diminished place, with only a couple of horses in the stables and fewer gamekeepers and no great weekend shoots any more…The swimming lake has been let go.  Its edges are susurrating reeds.’  Following the Anschluss in 1938 Viktor and Emmy flee Vienna for the relative safety of Kovecses.  ‘In the summer of 1938 Kovecses looks much the same as it has done, a jumble of grand and informal…[but] The roses are more unkempt…The house is much emptier.’  The safety is only relative: ‘The borders are under review and Czechoslovakia is fissile. And Kovecses is just too close to danger.’  Germany occupied the Sudetenland; Emmy died at Kovecses on 12th October 1938 and was buried in the churchyard of the nearby hamlet.  In early March Viktor got permission to leave for Britain, where he died in 1945.

The war and its aftermath wreaked their havoc on Kovecses and the Schey family, though happily Pips survived and Paddy records that he died in Normandy in 1957.