When I saw examples of Hans Bellmer’s Poupee in the ‘Silent Partners’ exhibition (post 13 November 2014) they triggered a recollection of something I had seen in London some years ago. After digging through memories and diaries I came up with L’Amour fou, which was shown at the Hayward Gallery in 1986. A bit more digging and I turned up the exhibition brochure: ‘An Introduction to Photography & Surrealism’ by Dawn Ades and a list of works (see below).

L’Amour Fou: Photography and Surrealism by Rosalind E. Krauss, Dawn Ades and Jane Livingston was published by Abbeville press in 1985.

(I saw the show on 24th September 1986 with Carola Rush, who was Darkroom Coordinator at the Cambridge Darkroom. Seeing L’Amour fou was doubled up with a visit to the W. Eugene Smith exhibition then running at the Barbican Art Gallery (28th August to 19th October)) 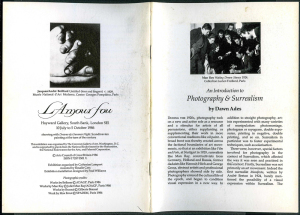 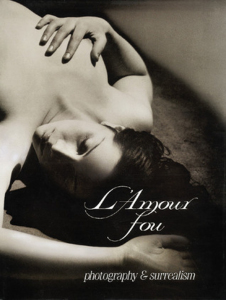