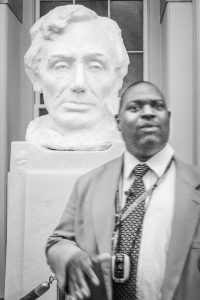 A Capitol tour guide stands in front of a bust of Abraham Lincoln by Gutzon Borglum.  The son of Danish immigrants, Borglum was born in 1867 in St. Charles, a child of Mormon polygamy. He was active in the committee that organized the New York Armory Show of 1913, the nativity of modern art in America. So far so apparently liberal.  However, Borglum was an active Freemason and, moreover, a member of the Ku Klux Klan.  He was one of the six knights who sat on the Imperial Koncilium in 1923, which transferred leadership of the Klan from Imperial Wizard Colonel Simmons to Imperial Wizard Hiram Evans.  He later disavowed his membership, but correspondence with D. C. Stephenson, the infamous Klan Grand Dragon, during the 1920s reveals a deep racist conviction in Nordic moral superiority and urges strict immigration policies.