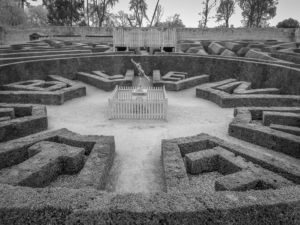 ‘Ma (間) is a Japanese word which can be roughly translated as “gap”, “space”, “pause” or “the space between two structural parts.” The spatial concept is experienced progressively through intervals of spatial designation. In Japanese, ma, the word for space, suggests interval. It is best described as a consciousness of place, not in the sense of an enclosed three-dimensional entity, but rather the simultaneous awareness of form and non-form deriving from an intensification of vision.  Ma is not something that is created by compositional elements; it takes place in the imagination of the human who experiences these elements. Therefore, ma can be defined as experiential place understood with emphasis on interval.’  Wikipedia