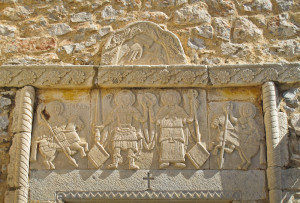 Three recent events have rekindled my interest in the Mani.  First was the publication of The Broken Road by Patrick Leigh Fermor, see post 30th November 2013.  This was followed by a friend sending me a link to a Word Press site dedicated to PLF*.  Finally, I bought a first edition (Harper, US, 1958) of PLF’s Mani – Travels in the Southern Peloponnese – unlike the modern paperback editions it is illustrated with contemporary black and white photographs by Joan Eyres Monsell, Fermor’s wife.   As a result I’ve started to revisit my photographs of the Mani.

Two photographs opposite page 49 of the Mani are captioned: ‘The painted bas-reliefs over the doors of the cathedral of Areopolis and the problematical coat of arms with the double-headed eagle.’  My photograph here shows one of the bas-reliefs (the upper of the two in the book) as it was in 2010.  Monsell’s photograph shows clearly that it is painted, but in what colours and how brightly one cannot tell.  When was the paint removed and is the cleaning an improvement?