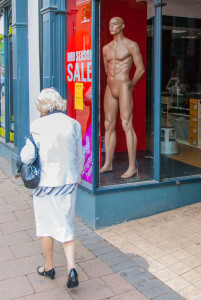 I’m making progress with my photo book of mannequins.  Following a short introduction, the first sections covering the Unreal and Ideal, Abstraction, Gender & Race, Agalmatophilia, Automatonophobia, Mannequin Art and Live Mannequins are almost complete, except for an additional picture needed to illustrate the Ideal.

I’ve selected 34 images for the portfolio section.  These are not just portraits of mannequins, they cover a wide range of approaches, including street photography, record shots and urban incidentals, capturing silent figures in the formal, informal and surreal ways in which they are used (and abused).  It is a way of exploring how the mannequin is displayed and seen, sometimes not in a traditional modelling role and sometimes not even a complete figure.  Sequencing the images has been an interesting challenge.  I’ve identified pairs where, through a similarity of approach, the figures establish a relationship, a visual and emotional dialogue.  These pairs and sets of pairs have then been shaped into an overall sequence: context involving human figures; trapped figures; stereotyping; the body; contrasts; and strangeness. 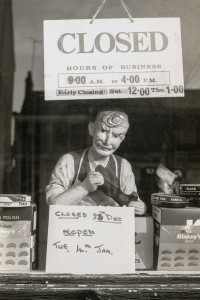 Most of the pictures in these sections of the book come from the relatively recent life of the project.  I have trawled through back files and there are a few older figures I want to include, however, e.g. a picture of a cobbler’s shop from 1982.

The final section is my review of the ‘Silent Partners’ exhibition held at the Fitzwilliam Museum, Cambridge in 2014-15 (see post 13th November 2014), which I don’t intend to change.

The book now exists as a very rough dummy, which means I can review the whole thing.  Some of the draft text will need to be rewritten to reflect the final choices of pictures and what they reveal about the strange and varied ways that mannequins inhabit our lives.