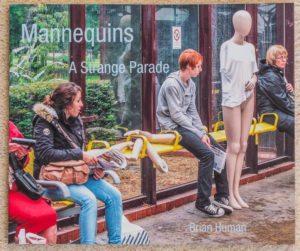 I’m surprised to discover that my first posting under Silent Figures was as long ago as December 2010 and there have been 68 subsequent entries.  In October 2016 I wrote that I was making progress with a photo book based on these pictures.  After a hiccup with the printing – significant differences between the ‘proof’ and the first order, which Blurb rectified at no charge – final versions of the book arrived in January.  I’ve titled it Mannequins – A Strange Parade. 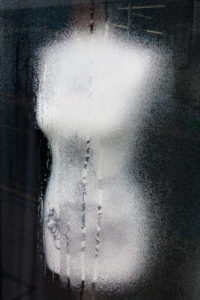 My favourite picture is the one used on the cover.  I captures all the strangeness inherent in the mannequin with added layers of surreal humour from the out of context setting.  I find it hard to choose between several for a second favourite, but I’ve decided on this picture taken in Ely in 2014.  I like the range of tones and the way the mannequin becomes ghostly and impressionistic.  The transient condensation veils the naked torso and refers back to the days when mannequins being redressed would have been draped decorously to avoid offence to innocent eyes.