On the visit to the Attenborough Building, part of the new Museums Site, Cambridge, the guide from Fauna and Flora International spoke with great enthusiasm about the modernist complex of buildings in which it’s housed (see post 9th September 2017).  It was originally designed as laboratories for Mathematics, Metallurgy and Zoology; it was in the form of an inverted ziggurat with linked towers and open spaces.  The guide stressed the clean lines, the clear vistas and the deceptively simple and slender structural features. 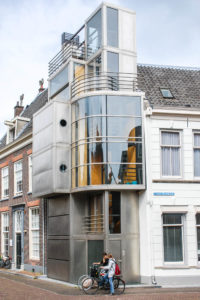 Someone on the tour whispered she was having difficulty in seeing the delight in all this and much preferred a few curves.  It sounded like a general criticism of modern architecture, or at least of it in its more Brutalist incantation. I agreed with the guide, and replied that it is really a matter of how well ‘modern’ architecture is handled – at its best it is as good as that from any other age, and doesn’t exclude curves.  Thinking about it sent me back to looking at photographs from an EHTF trip to the Netherlands.