‘Kalamata is a piling of crates and a pattering of olives.’
‘The Mani ascends in a shout for vengeance and dies in a dirge turned to stone’
Roumeli, Chapter 6, ‘Sounds of the Greek World’, Patrick Leigh Fermor 1966

‘But the dirges of the Mani are a very different matter….They are entire poems….the metre exists nowhere else in Greece…On the alert for dirges ever since arriving in the Mani….’
Mani, Chapter 5, ‘Lamentation’, Patrick Leigh Fermor, 1958

Note books of my visits to the in 2007, 2010 and 2011 Mani record: ‘the hesitant buzz of the first cicada’; ‘the cicadas, which filled the olives with their racket at mid-day’; ‘a cock crows and a donkey brays in reply’; ‘a pigeon coos quietly and a swallow skims overhead with a soft “vit vit”; ‘the sea lapped gently with a soft sucking sound….and harmonised with the susurrus of waves breaking on the distant shingle shore’; ‘the hum of foraging bees’; ‘a distant bell’; ‘cow bells’; ‘four men argued loudly’; ‘goats’ bells revealed an unseen procession through the trees; ‘voices floated up from across the gully’; ‘the cheeping of sparrows’; ‘the distant noise of an engine’; ‘a jet rumbles overhead’; ‘a boat putters across the bay’; ‘a cat’s sad evening mewing’; ‘the plangent notes of flute and piano’; ‘hidden voices and the chink of crockery’; ‘a couple talked in low voices and laughed nervously’; ‘the buzz of insects was punctuated by the sharp cries of buzzards soaring’; ‘a noisy school’; ‘TV screens showing the World Cup; rapid Greek commentary and a background buzz of rattles and vuvuzelas. Cicadas call, cars growl by, the fountain bubbles away’; ‘whining of a motor bike, the faint cooing of a dove’; ‘cheers from customers and waiters’; ‘nasal “kwurr” flight call of collared doves’; ‘the sounds of saw, hammer and generator from another new house’; ‘a blackbird singing from the top of the factory chimney’; ‘warblers calling scratchily from cover’; ‘a cistern flushing’; ‘rustling lizards’; ‘the intermittent coughs of a billy’; ‘banging of a pile-driver and the whine of a power saw, the Sunday sounds of building in the modern Mani’; ‘crickets drilling and an owl calling in the dark’; ‘men debating over everlasting cups of coffee’; ‘raised voices came from a cafe’; ‘larks singing overhead’; ‘noisy petrol strimmers’; ‘they chatted and laughed away, all Sunday piety lift in the church….A cheerful, social, voluble gathering; across the road squabbling sparrows set up a racket in opposition’. 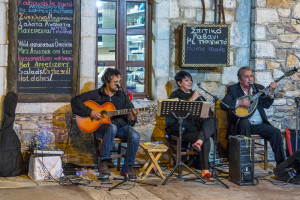 I visited again in 2014 and my arrival coincided with the Sarpsborg Jazz Club of Norway’s ‘Kardamili International Jazz Festival May 10-16’. The programme advertised: ‘Thalames, Traditional Evening with music and dancing’ on Wednesday 14th. A trio played a mix of traditional and modern amplified music and songs while a large party of Norwegians was being fed. Friends were not impressed; they didn’t want to linger.