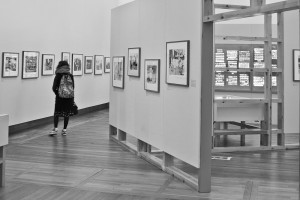 “But what of the subject matter, what is the work, especially by Ray-Jones, all about?

The introductory panel to the exhibition talks about Ray-Jones’s aim to ‘…record the English attachment to tradition and custom at a time he felt England was losing its cultural identity because of encroaching Americanisation’.  The essence is also captured in the title, ‘Only in England’.  The words ‘non-conformity’, ‘absurdities’ and ‘eccentricities’ pepper the exhibition and the accompanying publication.  Are these perspectives justified?

Second, Ray-Jones was prescient in looking at the way English society was changing and how some old ways were disappearing.  However, he was premature in predicting the death of custom and tradition.  The conservation movement is stronger than ever and customs such as Plough Monday, pancake races, the Boat Race, Derbyshire well dressing, harvest festival and Grasmere Sports continue to thrive.  And as Martin Parr points out in the accompanying film, the ongoing theatre that is the English seaside continues to play out each year.  (Ironically, it is not the traditions and customs depicted by Ray Jones that now seem transient, but the way of life captured by Martin Parr in Non Conformists.)

Third, tradition and custom are resilient because that are not static phenomena.  This is caught unwittingly in the caption to one of the photographs of the Bacup Coconut Dancers: ‘a tradition that dates back to 1857’.  This is little more than a 100 years from the date of the photograph and represents just one of the many so called ‘traditions’ and aspects of ‘The Season’ that were effectively invented in the Victorian and Edwardian eras.  In the same way new ‘traditions’ continue to emerge within our multicultural society, for example Glastonbury, the Notting Hill Carnival and the Worthing Birdman Competition.  We can only speculate about their longevity.

Fourth, does the partial, selective, nature of photography bias how we see these events?  Yes.  We have long known this about photography and the exhibition demonstrates it again in the comparison between the original Ray Jones work and that selected by Parr, where formal balance replaces the organised chaos.  The English may indeed be a strange breed, but there is an arguable case to be made that Ray Jones does not merely observe absurdity and eccentricity, he creates them.

So, this is a fine exhibition playing to photography’s strengths and working at a number of levels to give a wholly satisfying experience.  I saw the first Ray Jones exhibition at the ICA in 1968 and it is gratifying to see that his work has lost none of its ability to challenge, beguile and ultimately to enthuse.”