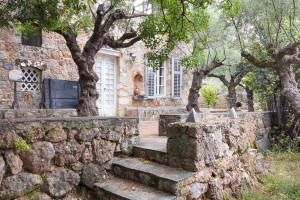 Part of the enduring legacy of Paddy’s life is his house at Kalamitsi, just south of Kardamili, widely considered to be one of the great writers’ houses.

It awaits an assured future in the stewardship of the Benaki Museum, but in the meantime is now literally on the tourist map in the form of the ‘Explore Kardamili Map’ published by the Anniska & Liakoto Hotels. (This is produced by proprietors Ilia and Geraldine Paliatseas: note that Paddy identifies ‘eas’ as a typical, possibly unique in Greece, Maniot name ending, (Mani, Penguin 1987, p.25), so there is a nice sense of completing a circle here.) 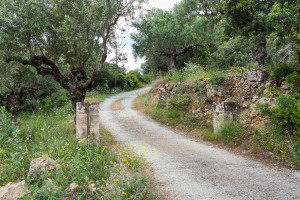 In mid-May I followed the route shown to the house.  A rough, narrow road wound down from the main regional road to an overgrown area that serves as an occasional car park. Two broken pillars marked a track to the right, leading up past a low stone building and curling steeply along a shaded path round the perimeter wall, above it an upper storey with broken shutters appeared. 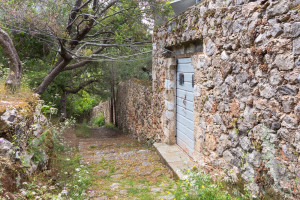 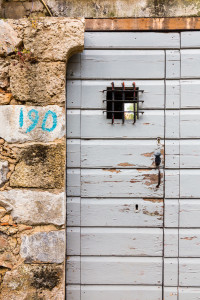 ‘190’ was painted on the stone jamb of a peeling blue-grey door. 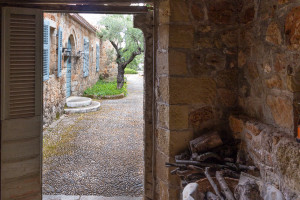 An iron grill gave a glimpse through a porch into the garden of olive trees, mellow walls, weathered shutters and pebble paths laid in intricate fan shaped patterns.

Following the wall round to the right there were glimpses into what lay beyond. Further on a scramble across a ditch and through a hedge led to the garden.   There was no sign of life; some shutters were open and one was broken; only occasional birdsong punctuated the quietness of abandonment. 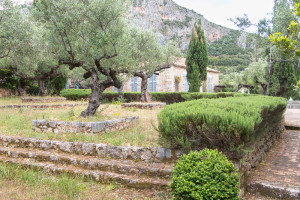 A low growth of weeds had taken over parts of the garden; and the water in the fountains was green and stagnant. 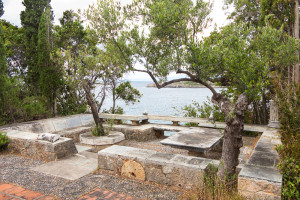 Happily the pebble mosaics on the terraces were still strikingly legible and had not yet succumbed to moss, lichen and weeds.
The seats with their views across to Meropi Island awaited only a broom, a tray of glasses and people. 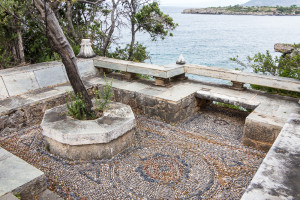 I strained in the silence to hear the echoes of Paddy, Joan, Bruce Chatwin, Xan Fielding, David Mason and so many others, a silence that called for the animation of new voices. 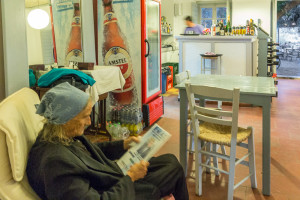 That evening I dined at Lela’s where the eponymous founder still watched over proceedings from a chair in the corner.
The live link called up a sense of optimism for the future of the house. And both made me reflect on Paddy’s prediction that Kardamili ‘…is too inaccessible and there is too little to do there, fortunately, for it ever to be seriously endangered by tourism’ (Mani, Penguin 1987, p.30).
Ironically, a form of benevolent tourism is likely to be the salvation for Paddy’s house.