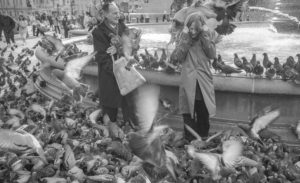 One of the most exciting things about going to London as a child was feeding the pigeons in Trafalgar Square.  We bought bags of food – I remember it as peas, but maybe it was corn – from the vendors and delighted in being festooned with flapping birds.  Woody Allen had not yet branded them ‘rats with wings’.  A Harris’s Hawk was introduced into the Square to scare off the pigeons in late 2002; in 2003 Ken Livingstone and the GLA made it illegal for anyone to feed the birds.  The last time I went to London I watched peregrines on the Tate Modern tower.