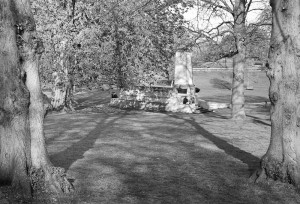 Walking through Christchurch Park, Ipswich, I came across the War Memorial and liked the juxtaposition of a threatening bundle of military gear on the Memorial and a father and child resting on the wall in the late afternoon sun.  I took a couple of pictures – not particularly original, but worth recording.  About 15 minutes later I was stopped in the town centre by two WPCs, who said very politely that the police had received a phone call complaining that someone might have taken their picture in the Park and had I been there.  I said I had and was photographing the Memorial.  They asked to see the last few shots on my camera; I was happy to oblige and they let it rest there.  All of which raises lots of questions?  Is it right to take photographs including people in public places?  Should I have asked if it was OK?  Was I obliged to show the police what was on my camera?  What would they have done if I had refused?  What would they have done if I’d been using film?  How did they find me, I wasn’t the only one with a camera in Ipswich that afternoon?  If I think I have right to take photos in public places, do people have an equal right to challenge me when I do?  Where is the line between general pictures of places that include people incidentally and pictures in which the people become a main subject?  Nothing new in all this, but the first time I’ve had such a direct challenge. Anyway, for the avoidance of any possible upset, the picture here is not the one I set out to take and can hardly cause offence (except to other photographers!).