The planned photo book on the ruckenfigur is complete (see post 22nd July 2013) and I’m awaiting delivery of copies.  Brought together in the book, Ruckenfigur Revisited might look like a coherent project, albeit a much extended one.   The truth is that it was nothing of the sort, rather something that emerged slowly through a growing fascination with these figures that held together in a loose narrative, starting from the specific form established by Caspar David Friedrich.

This is reflected in the choice of pictures: reviewing recent images led me to look at negative files going back to the 1960s (see Leamington Spa below), where I found many earlier examples of the approach.  The final selection includes material from 1980 to 2013. 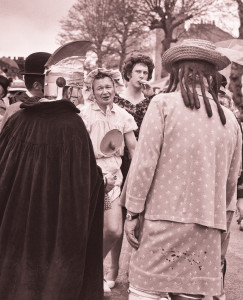 At the other end of the story, when does a project stop?  Perhaps it never will, but for the sake of leaving space for other things it is deemed to have ended on 25th September 2013 at Stansted, fittingly with the picture of impending departure. 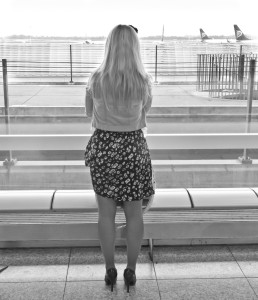 As an aside, in his second Reith Lecture Grayson Perry said: “…how do you tell if a photo’s art? Well you could sort of go just looking at are they smiling? If they’re smiling, it’s probably not art.”  That’s one of the advantages of the ruckenfigur, no give away smiles.