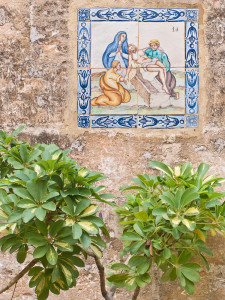 San Juan del Hospital stands somewhat aside from the main attractions of Valencia and so is an all the more satisfying discovery.

With roots dating back to the conquest of Valencia in 1238 and the Knights Hospitallier, it has a long and chequered history, including a period of dereliction that almost lead to its complete destruction.  Now a ‘Historic-Artistic Monument of National Character’ and is run by priests of the Prelature of Opus Dei as a centre for worship.

Behind an almost blank facade the entrance court is a delight, quiet and peaceful with tiled decorations marking the Stations of the Cross.  The simple nave terminates in six soaring arches coming together in an elegant apse softly lit by windows of thin sheets of alabaster.