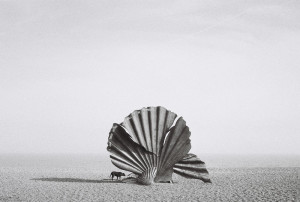 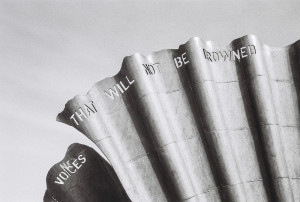 “In November 2003, a striking tribute to Britten and his music was unveiled on the beach just north of Aldeburgh. Scallop – a four-metre high steel sculpture – was conceived by Suffolk-born artist Maggie Hambling, and made by Aldeburgh craftsmen Sam and Dennis Pegg.

The phrase “I hear those voices that will not be drowned” (from Peter Grimes) is pierced through the steel, to be read against the sky. Images of wings rising in flight, swimming fish and the ripple of waves are all suggested by the work, whose scallop forms also recall ancient symbols of pilgrimage, Venus and the sea.”