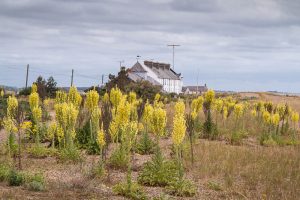 Shingle Street is a strange place.  Maybe it’s the remoteness, the restless sea and the unstable shape-shifting shore.  Maybe there are ghosts too. The lost name ‘German Ocean’, remembered only in the eponymous Mansions, echoes to the fervent patriotic clamour of 1914-18.  In the Second World War the beach was heavily mined.  The civilian population was evacuated with 48 hours’ notice in 1940 and homes were requisitioned by the War Department.  The military carried out bombing trials in 1943 and the Life Boat Inn and many of the wooden cottages were destroyed.  Then there are enduring rumours of a sea on fire and a failed Nazi invasion attempt in 1940.  Today even a forest of Hoary Mulleins appears alien.