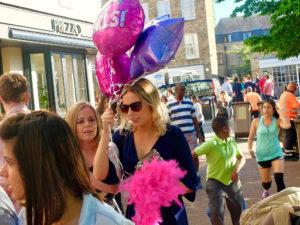 Earlier this week I spent an hour with David Runnacles drinking coffee and looking through his latest Cambridge street photography.  David has a very distinctive style.  His slices of street life are inhabited by lots of people, usually in close proximity and there is invariably a lot going on.  The subjects are active and interacting, sometime intentionally and sometimes accidentally and the pictures pose the challenge of how to read the gestures and movements.  His camera captures more dynamic and fractious street scenes than are apparent to unaided bystanders, street scenes that are a carnival of exotic and quixotic characters.  Using both colour and black and white, his contrasty, saturated images enhance the sense of drama and strangeness.  He takes hundreds of pictures in a session.  See David’s work on flickr under ‘selcannur’. 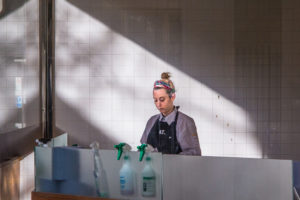 As we were talking David pointed out how very different my street pictures are from his.  (I should say that he is a very much better and experienced photographer than I am.)  My pictures focus on individuals, or maybe two or three people, picked out from the crowd, showing a relationship with another or with their surroundings.  There are fewer things going on and less complexity to unpick, though I aim to reveal subtle relationships.  My pictures are more reflective, less dramatic in composition, and the tones are softer.  The streets and their inhabitants are more quotidian than exotic.  I take maybe a handful of pictures when I’m out.