On Friday J asked me why I chose monochrome for the picture of Shingle Street posted on 26th July.  That’s a very good question.  There are three parts to the answer. 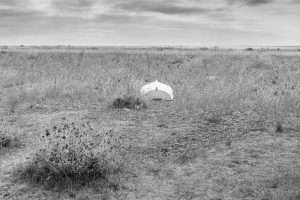 First, I find Shingle Street a strange, rather haunting place, as I mentioned on 23rd July.  The feeling I get there is elusive, but it’s a definite sense of otherness.  Reducing the scene to black, white and shades of grey reflects that feeling of separateness from the everyday world.

Second, part of the strangeness of Shingle Street derives from the sense of loss at the demise of the fishing community and the replacement by a mix of holiday making and home-working lifestyles.  The upturned boat, a fibreglass dinghy, represents that.  It is the focus of attention as a solitary white object in a grey landscape; the eye and mind are not distracted by the red and green of valerian and the intricacies of the shingle bank vegetation. 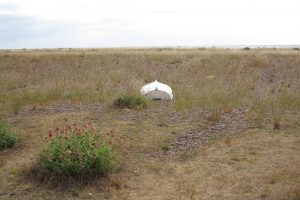 Third, there is a quality to the morning light on overcast days – perhaps due to the reflective qualities of the sea and shingle and the sun in the east – that translates into very subtle and beautiful shades of grey in the monochrome range.  It deepens the space into which the viewer is drawn.  You can see this in earlier pictures of Shingle Street posted in July 2012.

I believe that converting to B&W, and some basic work to bring out the sky tones, has changed a very boring colour picture of a boat on a beach into one that says much more about Shingle Street’s sense of place.  Or at least that’s how I see it.