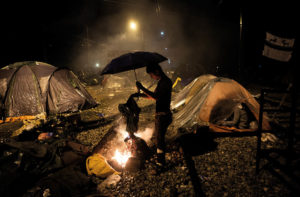 ‘A Syrian refugee burns a raincoat to warm himself at a refugee camp, at the border between Greece and FYROM: 12 March 2016 near the village of Eidomeni, Greece.  Yannis Kolesidis’  The caption on a photograph in the exhibition ‘The Itinerary’ at the Alison Richard Building (ARB).  On 12 March 2016 I was enjoying a very good birthday lunch with friends at The Anchor, Sutton Gault

Publicity for the exhibition explains its origins. ‘Eleven photojournalists have followed the trek of refugees from their point of origin – the Middle East and Sub-Saharan Africa – into Europe through the various stopover sites in Greece and the Balkans. The photographs in this exhibition document the refugees’ unimaginable struggles on their way to safety but also their routine, everyday activities and small moments of joy. Covering some of the distance between refugees and us, the photographs remind us that these are ordinary people on an extraordinary journey. They also make the viewer party to the experience and perspective of these eleven eyewitnesses to a great humanitarian disaster.’  A book published by the team contains the complete collection of photographs.

Some of the contributors spoke about their work at the ARB on Monday.  A few phrases summed it up for me.  ‘Who is a refugee?  A human with a name.’  ‘….capturing human grace…’  ‘Little is needed to protect or destroy.’  ‘Cold violence: discrimination, marginalisation, neglect.’  ‘Photography, a universal language?’  ‘Photographers are intruders.’  ‘Some images make the situation personal.’  ‘The pictures don’t need to dramatise – it’s dramatic enough already’ 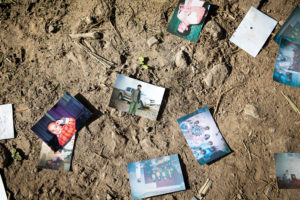 Another caption.  ‘Photos of refugees and migrants are scattered on a beach at the island of Lesbos on 22 October 2015.  John Liakos’  It’s the burning house questioned in extremis.