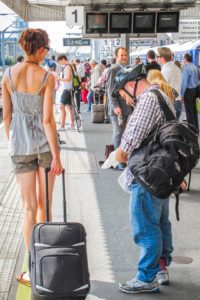 I’m sure there is a thesis to be written on what our travel bags say about us.  Travelling writers would provide good case studies.

Patrick Leigh Fermor, about to set out on his trudge across Europe in 1933, stopped off at Cliveden Place and in his words: ‘… picked up a rucksack left for me there by Mark Ogilvie-Grant.  Inspecting my stuff, he had glanced with pity at the one I had bought. (His – a superior Bergen affair resting on a lumbar semicircle of metal and supported by a triangular frame, had accompanied him  – usually, he admitted, slung on a mule – all round Athos with Robert Byron and Davis Talbot Rice when The Station was being written.  Weathered and faded by Macedonian suns, it was rife with mana.)’

Blake Morrison, reviewing Anatomy of Restlessness: Uncollected Writings by Bruce Chatwin, observed that for Chatwin: ‘Even travel gear – the stuff you need to flee the world of bourgeois possessions – inspires fetishistic adoration: “the lightest imaginable rucksack, stitched from strips of seal bladder and lashed to a frame of laminated birch”.’

My bags, black, are from JLP.