Posted on February 4, 2015 by brianhuman

A previous post (16th October 2014) touched on the way photographs may be presented with text. In the cases of Chatwin and Newby words and pictures provide complementary commentaries on the travellers’ experiences for the reader. From our understanding of the nature of both photography and travel writing we know that both are interpretations – a photograph is only ever a partial representation and all travel writing is an edited and polished (fictionalised?) version of the actual experience. Does the combination result in a greater truth or a greater fiction?

The pictures below are presented with my contemporary journal entries. 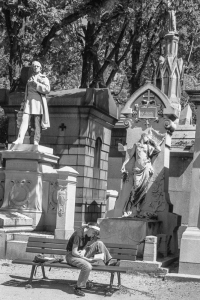 “A place of quiet; gone the sounds of traffic; and for the first time in Paris birdsong is in the air.
The lower half (below Avenue Traversale no. 1) is full of trees creating pools of light and shade. The upper half is more open with smaller tombs and dappled, cobbled avenues. Each route and division is marked with a sign. The mausoleums line the streets like little houses in a vision of an imagined Roman town. There are views through the trees to little temples climbing the slopes, a fairy hill town.” 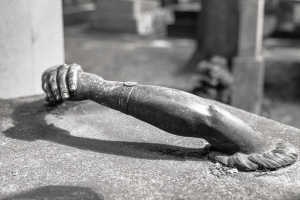 “The old sepulchres are black and crumbling with darkened and damaged doors. Sometimes a hole gapes into the ground – empty. A few of the old tombs have seen recent burials – family vaults – but many seem untouched since the first generation passed on. Elsewhere steep banks are crumbling and have been buttressed up over the tombs.

There are crosses, broken columns and obelisks. The dominant style is Classical with strong Egyptian influences. There are few gothic sepulchres. The newer graves at the top are covered with black and grey marble memorials and look solidly enduring.

As the sun shifts round it catches the edges of the stones and lighted faces shine out of dark backgrounds and recesses of shadow. Flowers (real and ceramic), mosaics and stained glass give splashes of colour to some graves. Photographs adorn others. The flowers of the horse chestnuts stand like candles relit each spring for the dead.

Elderly figures walk around with pots of water and flowers; some wash down gravestones.

Who is remembered here?
– General Antranik 1866-1927, Armenian hero
– Proust – a shiny black slab
– Edith Piaf – an unassuming family stone with fresh flowers
– Nadar – half hidden by hedges
– Felix de Beaujour – a gigantic tapering cone like an 19th century kiln
– Nerval – full of flowers
– Chopin – ‘concession a perpetuite 99071’
– Etienne Gaspard Robertson – 1763-1837 a tall monument with strange relief panels of skeletons and a balloon
– Oscar Wilde – flowers, mainly dead, and a postcard of the Eifel Tower from an admirer who wanted to be as great a writer and was finding only ‘bitterness and ashes’
– Gertrude Stein – an unremarkable stone
– Jim Morrison – now a squalid mess among older stones (almost lost in its physical insignificance) daubed with graffiti.”  (May 5th 1990) 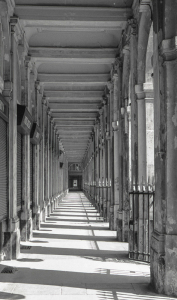 “Crossed to the Palais Royal – calm and uncrowded by comparison [with the Tuileries]. Young blacks do tricks on BMX bicycles and children kick footballs in the dust. Most visitors can see little in Daniel Buren’s arrangement of black and white columns; but people sit or lean on them and maybe this is part of the point. One column is sunk into a square pit and water flows around the base. Tourists toss coins down trying to land them on the top; most miss. Two boys with magnets on long strings fish over the edge and bring up ½, 1, 2 and 5f pieces. The Palais Royal is a place of cool shade under the arcade and trees and of bright heat around the fountains and on the square. But– it is not a garden as the English know it.”  (May 6th 1990) 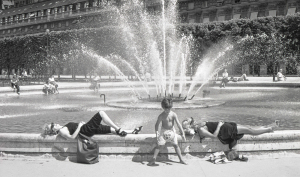