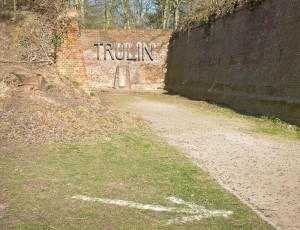 “Born in Ath in Belgium in 1897, Léon Trulin came to Lille with his family after the death of his father.  In June 1915, with Lille and much of Belgium occupied by the Germans, Léon Trulin went to England to join the Belgian Army in exile only to be turned away because of his diminutive stature; however the British Army proposed that he collect information on the occupied zone. He set up an organization which he called ‘Noel Lurtin’, an anagram of his name, to which he recruited his teenage friends. Together they sent reports, photos and plans back to Britain. Léon Trulin and his band of ‘glorious’ teenagers were arrested near Antwerp and sent to Lille, Trulin, was sentenced to death on 5 November 1915. His colleagues saw their sentences reduced, however, Trulin was executed in the ditch before the Citadelle three days later.”