Posted on September 9, 2018 by brianhuman 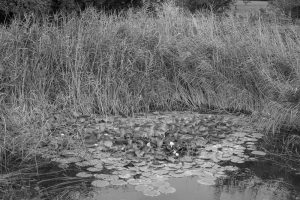 When I saw these water lilies growing in the corner of the lake at Quy Fen I was reminded at once of Peter Henry Emerson’s Gathering Water-Lilies (1868). Originally issued as a limited-edition photogravure print, the photograph of a man and a woman in a rowboat was subsequently published in Emerson’s first book, Life and Landscape on the Norfolk Broads. Emerson, an advocate of naturalism in photography preferred to present his work in books or albums, with text to accompany the image.  In 1889 Emerson published Naturalistic Photography for Students of the Art, in which he explained his philosophy of art and straightforward photography, making the case that truthful and realistic photographs should replace contrived work by the likes of O. G. Reijlander and H. P. Robinson.