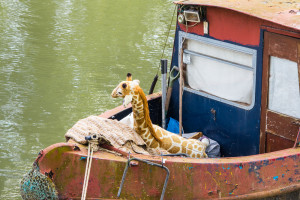 This morning I walked from Chesterton into the centre of Cambridge along the river.  The boats moored along the right bank are a continuing source of fascination with their endless variations on what makes a floating home.  Generally I welcome them: they add some life and colour to the river; and they create a faint echo of the water-born trade that was once important to the City.  But, oh dear, most of them are grimly shabby and many are covered with what is best described as rubbish.  It’s not hard to see why some people object to their presence (though I suspect that an apparently public spirited concern for the environment sometimes masks less charitable thoughts).  I don’t get too exercised about it, but it is depressing that a laudable private desire to live an alternative lifestyle, and reject the excesses of consumer capitalism, leads too often to public squalor.

At the end of this line of tatty craft I was cheered up by the sight of two terns (common?) flying high over Jesus Lock.