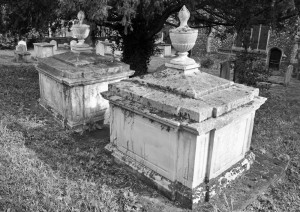 Churchyards are a seductive (easy?) subject for photographers – rich in forms, textures and tones.  But that’s not the same as saying they are not worth photographing, or the same might be said of a multitude of subjects.  And with the neglect, not to say vandalism, that many churchyards face the mere record is worth making.  It’s also salutary to realise that today’s funary arrangements will not leave anything as attractive and enduring for future generations of photographers.