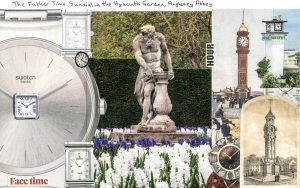 Lord Fairhaven’s work to create a great garden in the uninspiring Fen-edge landscape at Lode was something of a magnificent obsession.  Pevsner describes the grounds as ‘embellished by much statuary skilfully disposed’, an eclectic classical collection gathered on the Lord’s travels round the world.  I’ve long been fascinated by the individual pieces and there relationships with the spaces and planting – articles illustrated with my photographs appeared in Cambridgeshire Life (1989) and the Cambridgeshire Journal (1984).  More recently, I’ve posted several photographs on this blog, e.g. 27th March 2017. 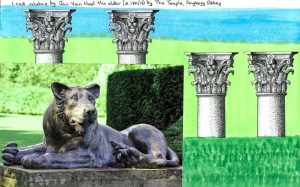 However, I think photographs of sculpture (or any work of art) pose a problem. How does the photograph add something so that it is not merely a record, a page in a glorified catalogue?  Fine photographs might achieve that end, but there is a risk that they will always fall in the long shadow of Atget.  Another approach is to see the photograph – either an original or a postcard/published illustration – as the starting point for something else that explores and interprets the subject through the inclusion of other material.  In thinking about this I’m influenced by the ‘imaginary travel’ of Joseph Cornell.  The two collages here, first attempts, are based on postcards.