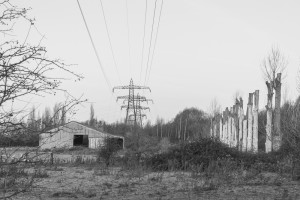 These two pictures depart completely from the sunrises taken on the same day and shown in the previous two posts.  They are part of a current fascination with traces, remains.  What was the building used for?  Farm machinery?  What trees were these? Poplars?  When and why were they reduced to this sad state?  When the A14 bypass was built in 1976-77? 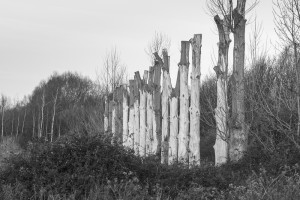 I prefer them to the sunrises, but these two attempts do not do justice to this subject, which needs to be revisited.  And how might these ‘trace’ pictures fit into the emerging story of early morning walks?  Note: though converted to B+W, the originals are almost a monochrome sepia.