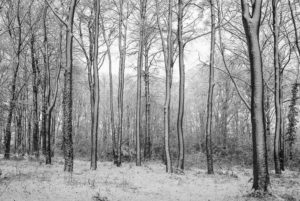 The snowfall was light, directed by a gentle wind.  In the woods snow settled on branches outlining them in graphic sketches of black and white; in open places the drift painted the trunks is white, as though seen in a strong sidelight. 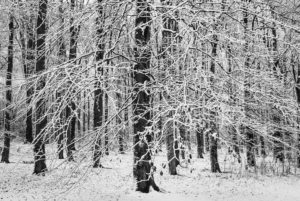 The woods took on a softer, more open air as reflected light filled the shadows and smoothed the rough leaf litter and gnarly exposed roots. Paths through the old woods were blurred; paths around the new woods were smooth white roads between lacy hedges 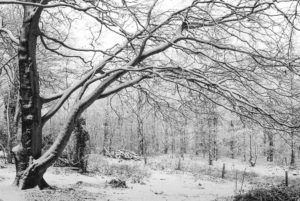 A dog bounded along on muffled paws; a crow’s melancholy call echoed through the icy air; underfoot the soft crunch of snow replaced the crackle of dried leaves and mast husks.