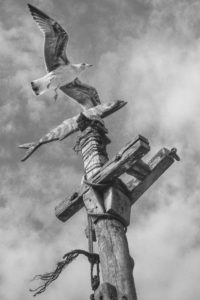 ‘Past the fish market and the landing area where men in blue squat gutting fish, attended by hordes of well-fed herring gulls….Fish are packed on ice in plastic crates and carted away from the quayside.  Meagre catches rest in baskets or lay on newspaper waiting for buyers.  Pervading all, the smell of fish – not the freshness of the sea, but the putrid stink of unwashed docks.  Dirty clothes, wind blackened faces, hard calloused hands – also nimble fingers mending nets endlessly.  “That’s not fish, that’s mens’ lives”, is given a stark reality.’  Essaouira 18th September 2006